Tech is hot, and the stock market is behaving like the dot.com bubble of 2000.

The COVID-19 pandemic pushed our dependency on tech to new heights: we now literally work, eat, exercise, socialize and entertain without ever leaving our home.

More tech companies are planning IPOs than ever, making founders and employees into millionaires overnight.

Are we in another Dot.com bubble? When will the stock bubble burst? And more importantly, how can we protect ourselves? Read on to learn about the Dot.com bubble and my prediction of when the bubble will burst.

What is a Tech (Dot.com) Bubble?

A bubble refers to the soap bubbles children love. To make a bubble, you blow air through a thin layer of soap; it magically gets larger and larger until it bursts suddenly.

The word “bubble” in the stock market world refers to a similar situation. Stock prices would keep rising far higher than what the companies are worth.

The most recent example of the bubble is the 2000 stock market crash. Let’s take a trip down memory lane.

The Losers of the Tech (Dot.com) Bubble

Some of the biggest losers in the dot.com bubble were the hottest dot.com companies at the time, including Yahoo!

Yahoo’s shares appreciated 1400% in four years, and then lost most of it two years late!

Yahoo might sound like a weak company today, but it was the hottest company back in its day. Yahoo was Netflix, Google, and Facebook combined because it had entertainment, search, and social.

The best and brightest worked at Yahoo, the most ambitious and creative were there too.

Everybody with a computer was visiting Yahoo all around the world.

Yahoo got even more dominant after acquiring Geocities for $3.56B. At the time, Geocities was the 3rd most visited site on the internet. I built my first website on Geocities.

Yahoo’s stock only increased after the crash because its founder, Jerry Yang, allowed Yahoo to buy a 40% stake in Alibaba, which later became a tech giant in China.

So Yahoo had it easy. Other tech companies had it even worse.

Pets.com, for example, went from a massive IPO to bankruptcy in a year.

The idea of Pets.com is Chewy.com today. Pets.com was so popular that its balloon even walked in the 1999 Macy’s Thanksgiving Day Parade.

But since the IPO, the company kept losing money until it sold assets to pay back its investors.

Survivors of the Tech (Dot.com) Bubble

Cisco and Intel were considered the golden tech of its day, with technologies that defined and created entirely new industries.

Both Cisco and Intel survived the 2000 tech bubble and still exist today. In some ways, they are still successful companies making billions of dollars and employing thousands.

But 20 years after the dot.com bubble, their stocks still have not recovered.

Cisco, for example, reached the peak price of $79 in 2000. Its stock price after the 2020 pandemic stock appreciation has not exceeded $60.

Similarly, Intel continued to dominate in the hardware chip space.

But its stock never fully recovered.

Winners of the Dot.com Bubble

However, not every stock died during the dot.com era.

Some emerged from the ashes and went on to do even more unbelievable things.

Of the FAANG companies of today – Facebook, Apple, Amazon, Netflix, and Google, only Amazon and Apple existed in 2000.

Both Amazon and Apple suffered during the 2000 dot.com bubble, but their stock dip back then is barely noticeable compared to the meteoric rise since.

Similarly, both Apple and Microsoft not only survived the dot.com crash they thrived to become the #1 and #2 most valuable companies in the world, exceeding a trillion dollar in valuation!

What Causes the Dot.com Bubble?

There are many reasons why the stock market crashes, and we’ve covered most of the scenarios in my original Stock Market Crash post here.

Specifically for the dot.com crashes, there’s a lot of evidence that the dot.com bubble is an example of the stock market behaving irrationally.

Robert Shiller, a famous Yale economist, wrote in his book “The Irrational Exuberance” that as the bull market develops, it can generate optimism about the future, and the optimism can become so irrational that it stimulates irrational demand and prices.

In other words, as people make money off of their investments, they become even more confident of their ability to make even more money in the future that eventually, they stop looking at facts.

Until one day the bubble bursted.

Indeed, the dot.com bubble is a classic example of irrational exuberance.

Is the Next Dot.com Bubble Crash Coming?

One of the best ways to measure if the next crash is coming is to look at market’s irrational exuberance.

In other words, let’s look at the price of stocks relative to their earnings. Or, is the stock price getting higher despite companies not making too much money?

The same economist Robert Shiller created a metric called the Shiller PE ratio to measure the level of irrational exuberance in the market today.

From multpl.com, I got the following graph for the Shiller PE ratio.

You can see that the Shiller PE ratio is very high today: in fact, it’s even higher than what it was during Black Tuesday, though still lower than the peak of the Dot.com bubble of 2000.

How Big Can the Bubble Grow Without Bursting?

In some sense, we should expect the Shiller PE ratio to be higher today (or for the bubble to be bigger today) because companies in tech might lose money for quite some time before making money.

Amazon is a classic example of a company that struggled for decades to become profitable before finally creating the kind of ecosystem to dominate profit.

But how large is too large? Are we at the edge of another dot.com bubble?

The truth is, nobody knows.

Many people thought the market would crash in 2016, and then more thought it was going to crash in 2020.

Some people also pulled their money out during the pandemic and lost big during its subsequent recovery.

My Prediction on the Dot.com Bubble

I predict that the dot.com bubble will not burst in 2021 because the pandemic has thrown a curveball and accelerated technological advancement.

The pandemic has fundamentally changed the way we live, and with it, technological progress that was supposed to take ten years became a reality in two months.

Zoom is no longer a side option: it is now a requirement.

I’m also talking about us entertaining ourselves on TikTok, Roblox, and Netflix.

Technology is eating the world because a virus has closed all other options, and we realize while this is not ideal, it is possible.

What will life look like post-pandemic? Nobody knows, except that we are not already living in the future we didn’t think would come for another ten years.

But one thing is for sure: the dot.com crash with the pandemic is now much more unpredictable.

Every Industry is Waiting to be Disrupted

If you think tech disruption has already occurred, think again.

Medicine is on the cusp of being transformed by telemedicine. And the same goes for every other industry.

Finance is about to be bombarded by this new thing called blockchain and Defi, which I won’t get into the details.

The best is yet to come.

But of course, this tech bubble will burst.

I just don’t think it’s going to bust just yet, given the opportunities ahead and the lack of alternative investments.

The pandemic will shift the dot.com bubble to be even larger before bursting.

How to Prepare for the Next Dot.com Bubble Crash

There are ways you can still prepare for the next Dot.com bubble crash.

1. Invest Most Money In Index Funds

Looking back in history, here are the facts:

The question is – can you predicate which company is the Yahoo of today and the Amazon of tomorrow?

In ten years, some unknown startup could come out of nowhere to beat Google or Facebook.

Are you confident that you can stock pick the winners and avoid the losers?

So for most of my money, I put it in the U.S. stock market index funds.

Even if you had invested in a technology index fund, such as the NASDAQ composite index, you would’ve still made money. But only if you had a lot of patience.

The chart below shows that the Dot-Com crash completely erased the NASDAQ gains in 2000, and this technology index took 14 years to recover back to its peak in 2000.

But only five years after, it doubled.

After all, the NASDAQ is betting on technology, and technology has dramatically overtaken our lives today.

But what does the future look like in a post-pandemic world? Will technology continue to outperform other sectors, or are we in another tech bubble?

My advice? If you like technology, buy some NASDAQ index funds, but don’t put the majority of your money into a single sector no matter how much you think it’s going to take over the world.

And if you want to stock pick, do that with less than 10% of your net worth only.

As long as you invest in broad index funds that span across the entire stock market, you will be fine.

If a crash is inevitable, why can’t we sell everything now? Wait until the crash to buy at the bottom?

Well, the problem with this strategy is that you don’t know when the crash will happen.

For example, back in the 1990s, the market was already technically overvalued in 1995. By 1996, many people were worried about a tech bubble bursting.

So keep investing, and trust the stock market will always go up.

Look: losses can hurt a lot more than your gains can feel good.

Research has shown that seven of the best ten days of stock performance occurred within two weeks of the ten worst days.

The best days of stock performance occur right after the worst days.

It means that if you missed out on a few days that happen to be the best performing days, you could lose big.

Are you missing out on the best 20 days? Keep your money in the stock market! 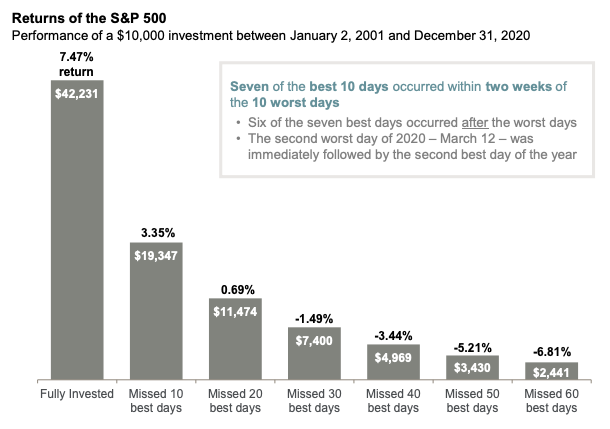 4. Have One Year Worth of Emergency Fund

Last but not least, you need to diversify and protect against the worst scenarios.

To diversify, make sure you have your investment in various funds, from NASDAQ to the S&P 500 to the entire U.S. stock market.

To protect against the worst-case scenario, make sure you have one-year worth of expenses saved in cash. This way, you won’t be forced to withdraw your stocks even after a layoff.

But you can’t do that if you also lose your job and simultaneously need money to pay for your mortgage or to eat.

In some sense, it feels like the tech rush of today is at the cusp of another dot.com bubble crash.

Remember what happened to Yahoo and Pets.com? Don’t put all of your money into the best stocks of today.

But no matter when the dot.com bubble will burst, you should always behave the same: that is, diversify your investment portfolio to both tech and non-tech stocks in index funds.

Never day-trade because you might miss out on the few days where gains count.

Lastly, have lots of cash. Like, one year’s worth of cash.

How much house can you really afford? Read the 2-series guide: How Much House Can I Afford for FI/RE?

Are you making enough compared to other Americans? Use this calculator to find out: Income Percentile Calculator for American Income

Why is America becoming so unequal and what to do about it? Check out How to Make Money Despite Wealth Inequality

Want to support my work?

Buy Me a Coffee